Full-service OUTDOOR MOVIE and DRIVE-IN event production.
Setting the standard for over 20 years!

We love what we do, and we do it well!

Our production crews handle all setup, operation, and transport of equipment. We are equipped with the finest in professional audio-video equipment. We run your technical production so you can focus on running your events. 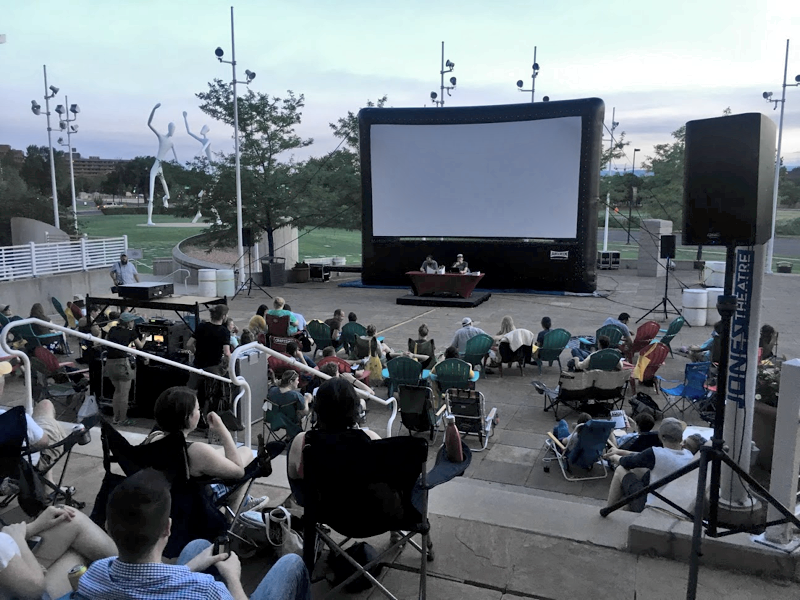 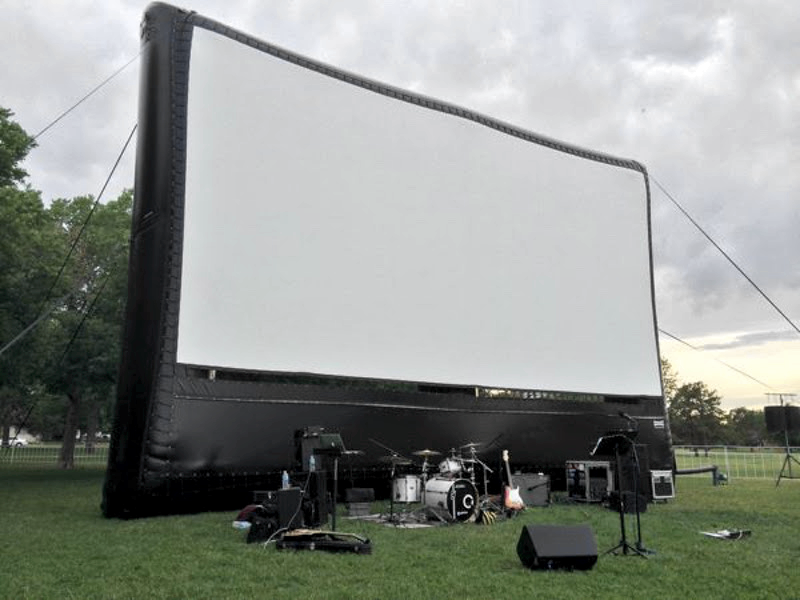 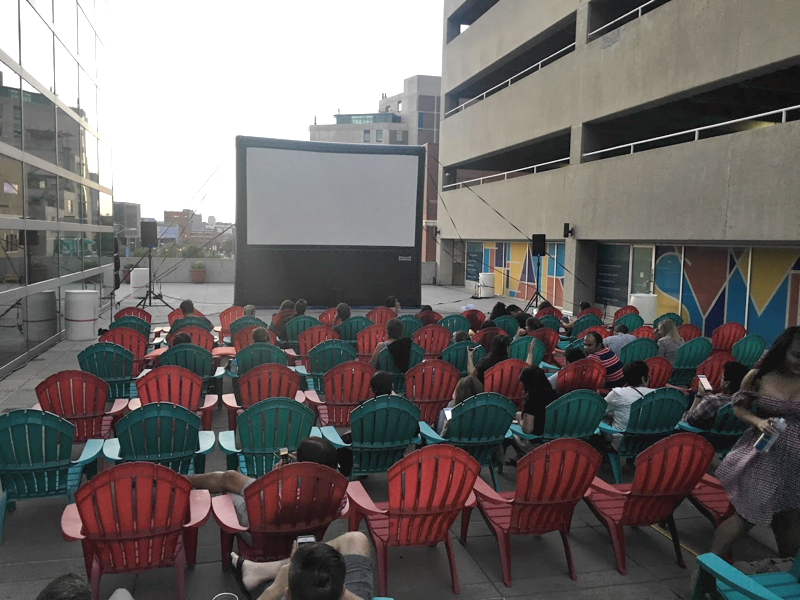 FIRST OUTDOOR MOVIE PRODUCER IN COLORADO!
We began this journey back in 1995 before DVD’s and screened our creative little film series using 16mm projectors. Outdoors! This event started in Boulder, Colorado creatively promoting, marketing, and producing the entire film series ourselves. Simply put, we have walked in your shoes and know how to give you the support you need. We’ve been doing it the longest and the Boulder Outdoor Cinema lasted for almost 20 years.

EQUIPMENT
We have the finest quality equipment for your outdoor cinema event. Our AIRSCREEN inflatable screens are able to handle the rigors of Colorado weather. While the wind blows some over, ours will stand strong. Our projectors are film festival quality delivering High Definition and our lamps are changed each season so you get the brightest image possible. Your movie will sound the way it was intended with our subwoofers and professional-grade sound systems.

WE ARE EVENT PRODUCERS TOO!
We’re not just your technical equipment vendor. Since we’ve been creating our own events (even before outdoor movies) for more than 20 years, we know how it feels to be you and it shows in the way we take care of you. We are intricately involved in asking the right questions to assure your outdoor cinema event is a calculated success.

OUR TEAM
What can I say about our team! They are outdoor adventurists, filmmakers, production designers, audio engineers, actors, screenwriters, projectionists, entrepreneurs, and great people to work with. They will become your best ally during your event. Taking care of your every need. We believe we have the best crew out there!

COMPETITIVE PRICES
We’re not the lowest price and we’re definitely not the highest. We have found the perfect balance of delivering the highest quality equipment and services to keep you on budget. We also work closely with non-profits and schools to make these events more affordable. Request a quote today.

HOW DO YOU COMPARE TO THE COMPETITION?
We have been doing this outdoor movie thing longer than anyone else in the state! We also supply high caliber screening equipment and technicians year-round to indoor film festival’s which keep our systems at the highest quality levels. Our competitive rates are in the sweet spot! Not too low, reflecting low-end equipment and services. Or too high to be out of reach.

WHAT AREAS DO YOU SERVE?
We are a Denver, Colorado-based company and primarily service the entire state of Colorado. We also service our bordering states of Nebraska, Kansas, New Mexico, Wyoming, Utah, and some areas of Arizona.

HOW MUCH DO YOUR SERVICES COST?
Our production costs will vary depending on a variety of factors. System size, how often you do it, the day of the week, the month of the year, and distance we need to travel to your venue. Keep in mind our services do not include the cost of licensing the movie. The average cost to license a movie for an outdoor movie event is $300-$500. Request Quote.

WHAT TIME CAN THE MOVIE START?
Typically you can begin your movie at the official sunset time. It can also depend on the brightness of the movie itself. A bright Toy Story could start earlier than the opening dark sequence of E.T., for example. Sunset times are available from HERE.

AM I REQUIRED TO PURCHASE A LICENSE TO SCREEN A MOVIE?
Typically if your event is open to the public and beyond a simple backyard movie for the family, you’ll need to acquire a license. See our Film Licensing section for more on that. A list of Film Distributors is available there.

WHO USES YOUR SERVICES?
We provide outdoor cinema services as well as film festival services. Some very predominant film festivals have entrusted us to provide all of their screening equipment for their events. We work with city municipalities, shopping destination centers, golf courses, HOA’s, high schools, businesses, churches, and live broadcast sporting and political events. These digital screening systems have virtually unlimited application potential.

WHAT HAPPENS IN THE EVENT OF BAD WEATHER?
Our weather guarantee assures you that your event can be postponed prior to setup and re-scheduled for another day at no charge. We monitor the weather in real-time and keep in close touch with our clients to help them make weather-related decisions.

HOW SAFE AND STABLE ARE YOUR SCREENS?
Our AIRSCREENS can withstand up to 25 MPH winds. They are non-perforated for the best possible image while cutting out any light that can bleed through the back of perforated screens. They also perform well in winter conditions.

WHAT IS THE SETUP AND BREAKDOWN TIME FOR OUTDOOR MOVIE EVENTS?
We typically arrive on site 3 hours prior to the start of the movie. It takes about 1-2 hours to get everything in place to begin testing. We are normally completely up and running an hour before your movie is set to start. Breakdown takes about 1 hour.

Published in support of the Motion Picture Association of America

What is a “Public Performance?”
Suppose you invite a few personal friends over for dinner and a movie. You purchase or rent a copy of a movie from the local video store and view the film in your home that night. Have you violated the copyright law by illegally publicly performing the movie? Probably not.

But suppose you took the same movie and showed it at a club or bar you happen to manage. In this case, you have infringed the copyright of the movie. Simply put, movies obtained through a video store are not licensed for an exhibition. Home video means just that: viewing of a movie at home by family or a close circle of friends.

Why is Hollywood concerned about such performances?
The concept of “public performance” is central to copyright and the issue of protection for “intellectual property.” If a movie producer, author, computer programmer or musician does not retain ownership of his or her “work”, there would be little incentive for them to continue and little chance of recouping the enormous investment in research and development, much fewer profits for future endeavors. {josquote}Unauthorized public performances in the U.S. are estimated to rob the movie industry of between $1.5-$2 million each year.{/josquote} Unfortunately, unauthorized public performances are just the tip of the iceberg. The movie studios lose more than $250 million annually due to pirated movies and several hundred million more dollars because of illegal satellite and cable TV receptions.

The Law says
The Federal Copyright Act (Title 17 of the U.S. Code) governs how copyrighted materials, such as movies, may be used. Neither the rental nor the purchase of a movie carries with it the right to show the movie outside the home. In some instances, no license is required to view a movie, such as inside the home by family or social acquaintances, and in certain narrowly defined face-to-face teaching activities. Taverns, restaurants, private clubs, prisons, lodges, factories, summer camps, public libraries, daycare facilities, parks and recreation departments, churches, and non-classroom use at schools and universities are all examples of situations where a public performance license must be obtained. This legal requirement applies regardless of whether an admission fee is charged, whether the institution or organization is commercial or non-profit, or whether a federal or state agency is involved.

Legal Sanctions
“Willful” infringement for commercial or financial gain is a federal crime carrying a maximum sentence of up to five years in jail and/or a $250,000 fine. Civil damages for the willful infringement may be as high as $150,000 per work, and even inadvertent infringers are subject to substantial civil damages, ranging from $750 to $30,000 for each work illegally shown. The MPAA and its member companies are dedicated to stopping the film and video piracy in all its forms, including unauthorized public performances. The motion picture companies will go to court to ensure their copyrights are not violated. For example, lawsuits have been filed against cruise ships and bus companies for unauthorized on-board exhibitions. If you are uncertain about your responsibilities under the copyright law, contact the MPAA, firms that handle public performance licenses or the studios directly. Avoid the possibility of punitive action.

To Obtain a Public Performance License
Obtaining a public performance license is relatively easy and usually requires no more than a phone call. Fees are determined by such factors as the number of times a particular movie is going to be shown, how large the audience will be, and so forth. While fees vary, they are generally inexpensive for smaller performances. Most licensing fees are based on a particular performance or set of performances for specified films. The major firms that handle these licenses include:

In other specialized markets, such as hotels and motels, many Hollywood studios may handle licensing arrangements directly.

Applications and locations for these inflatable screens are many. Here is a great list to get your creativity flowing.

Rain happens! For only $200 per event, if it rains during your show and you need to cancel, we will return at no charge to make up your event. Simple as that.